Doing Art and Being a Mom: a Photographer That Does Both and the Story of Travelling Around the US with Her Son

Doing Art and Being a Mom: a Photographer That Does Both and the Story of Travelling Around the US with Her Son

“I took Casper on his first road trip when he was three-months old and by the time he was one we managed to stay out most of each year for the next five years of his life” begins the written story that comes with these photos. By the time I finish this first phrase, I’m already hooked. Justine Kurland is the photographer, Casper’s mom and the writer of this essay published in a book called How We Do Both: Art and Motherhood. And not only I love her photos and the stories around them, but I’m also genuinely interested in how exactly can we do both art and motherhood.

Honestly, I didn’t really find out how to do both, but found out how Kurland does it. And there’s some inspiration in her story. She tells of how Casper changed her life completely. Yet photography is clearly so much part of who she is, that having Casper and taking photos blend inside her.

A part of me tells me I could be like that and a good part of me fears I wouldn’t. I’m afraid I wouldn’t be able to do both. She travels with Casper at an age when kids don’t compare, they just take life as it is. And their life is magical, hard and eventually rootless. There comes a time when kids need roots. But his memories and experiences are for sure extraordinary and unique. The kind that makes a kid have a magical thinking to bring into adulthood and a sense of inner freedom.

While Kurtland’s photos are beautiful and the photos of the little boy would make you think ‘road trip’ – perhaps – without knowing much about them, what gives coherence to both work-photos and roadtrip-documentation photos is the essay Kurtland wrote. This story to tell, not only to see opens up a subject that I’m sure many think of and makes you wonder. And I love that.

Read a part of this beautiful essay on Feature Shoot. 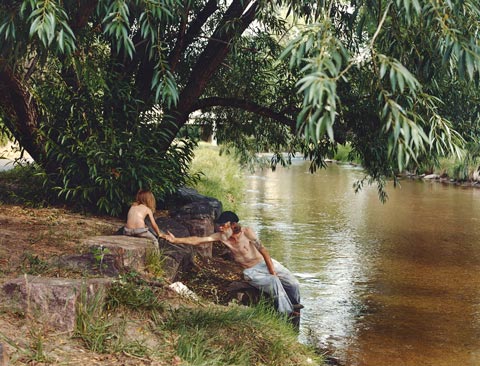 ← The Idiot Box: a Touching Photo Series of Kids Watching TV Said to Point at Something It Doesn’t Really Point At
The Middle of Nowhere, the Mist and the Longing: a Series of Photos from Around the Wadden Sea →